MUMBAI: Chanda Kochhar, the former CEO of ICICI Bank, has approached the Bombay high court challenging the validity of the bank’s termination letter issued early this year. She has sought from the court a declaration upholding the validity of an earlier letter in October 2018 wherein ICICI Bank had accepted her early retirement.

Last year in October, Kochhar had put in her papers after a controversy following accusations that the bank’s borrower, Videocon Industries, invested in her husband’s company as a quid pro quo for the bank’s loans. ICICI Bank had accepted her early retirement application and appointed Sandeep Bakshi as managing director & CEO for a term of five years.

In February this year, however, Kochhar received a letter from the bank saying that she is terminated “for cause, in view of pending inquiry”. The bank also then cancelled all her benefits, right from 2008. The amount is estimated to be significantly high. 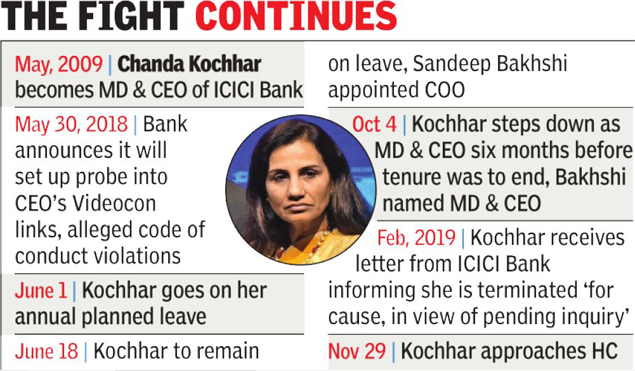 Kochhar’s case now is that once her early retirement was accepted by the bank, it cannot terminate and withhold her benefits. A Bombay HC bench of Justices Ranjit More and M S Karnik on Thursday placed the case for a hearing on December 2.

The issue before the court in Kochhar’s plea is that having accepted her request for the early retirement, she no longer was an employee of the bank for it to be able to terminate her services. Unless she is restored on the rolls of the bank, she cannot be removed again. She is citing and relying on provisions of the Banking Regulation Act, particularly section 35(b), which deals with appointments and termination of chairpersons, managing directors, and directors of a company to be subject to prior approval of the RBI.

Destiny of enterprise journey might cling on Covid-19 tracing apps

What to do in New Orleans

Give your well being a brand new increase with saffron water or kesar ka...

Hearth breaks out at cardboard manufacturing facility in Delhi’s Bawana