NEW DELHI: The government has begun discussions with states for a possible revamp of the goods and services tax, which may include bringing a few exempted items under the levy while reviewing the rates and the cess on all goods and services, as part of an exercise to shore up revenue.

In a letter to states, the GST council has given a full menu of options and suggested their feedback ahead of a meeting of ministers expected before the end of the month. The move comes at a time when tax collections have been hit, which authorities believe is due to a massive reduction in rates. The RBI had recently estimated that the effective GST rate in India has come down from 14.4% in May 2017 to 11.6% now.

Officials said this has robbed the government of potential revenue of around Rs 2 lakh crore annually and also increased compensation payout to states as the Centre had assured them to make good on any “losses” in case collection growth was less than 14% a year. The economic slowdown, along with tax leakage, has added to the government’s woes and the growth has been lower than anticipated despite an expansion in taxpayer base.

“The effective indirect tax rate on many products in the pre-GST era was around 25%, which has reduced to 18% in GST. In the absence of a significant increase in volumes, there would be an impact on revenues,” said M S Mani, a partner at consulting firm Deloitte India. 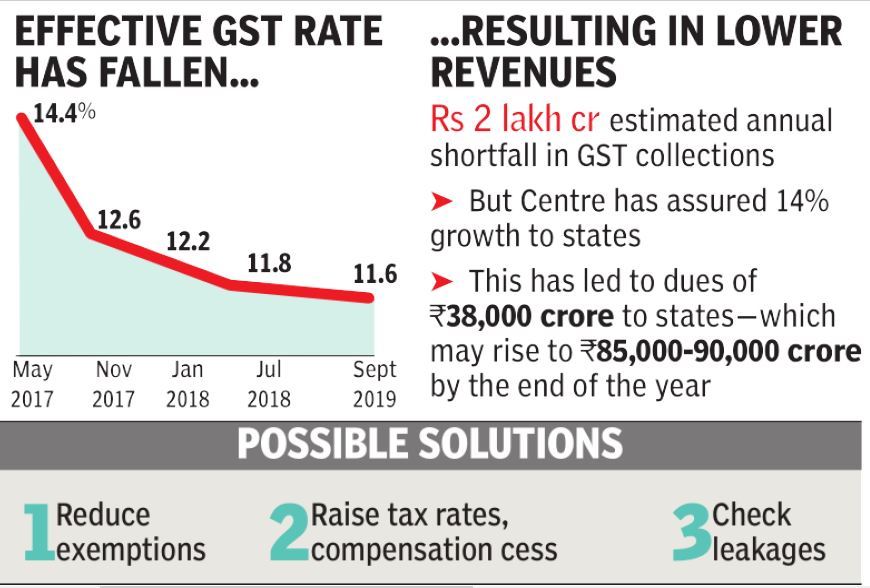 Another tax consultant said the services sector revenue has not seen a significant expansion in the base as investments have slowed down. As a result, the GST council has asked states to review the list of products that are currently exempted, which includes some of the items that were earlier subject to tax.

With states complaining about the Centre holding up compensation, the government is also seeking a review of the items that can face the levy apart from looking at the possibility of enhancing the levy on existing items like tobacco, soft drinks and cars.

With the compensation cess kitty eroded, states have little choice but to either agree to settle their bills over a longer period than the five years that was provided for or agree to higher cess or expanding its scope, said officials.

Stay healthy this holiday season; here are some things to know

Shares anticipated to commerce the economic system’s reopening within the week...

Bollywood Information: Ayushmann Khurrana has a particular shock for all of...

Raghuram Rajan clears the air on the best way to fund...

admin - November 18, 2019
0
Stocks in Asia were set to trade higher at the open on Monday as investors look for further developments on U.S.-China trade.Futures pointed...