Zimbabwe were 30 for no loss – still trailing by 127 – after Angelo Mathews struck his maiden Test double to give the visitors a first-innings lead of 157. Sri Lanka declared on 515 for 9 with Mathews unbeaten on 200 off 468. 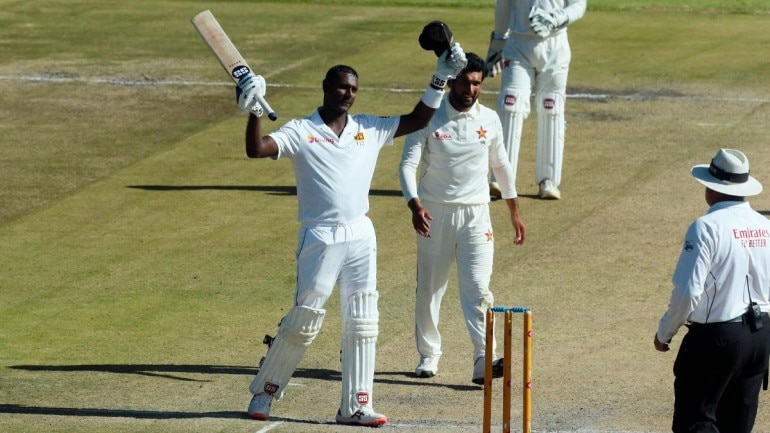 Angelo Mathews was unbeaten on 200 from 468 balls vs Zimbabwe. (AP Photo)

Angelo Mathews scored a maiden Test double-century as Sri Lanka took control of the first Test against Zimbabwe at the close of day four at the Harare Sports Club on Wednesday.

Mathews was unbeaten on 200 from 468 balls after batting for exactly 10 hours to lead the tourists to 515 for nine declared and a first-innings lead of 157.

Zimbabwe weathered a difficult period before the close to going to stumps on 30 without loss, with openers Prince Masvaure (15) and Brian Mudzinganyama (14) at the crease.

The uncapped Mudzinganyama is the sixth case of a concussion substitute in test cricket since the rule was introduced on Aug. 1 last year as he replaced another debutant, Kevin Kasuza, who batted well for 63 in the first innings.

Kasuza was struck on the helmet while fielding at short-leg on Tuesday and woke up on the fourth morning feeling dizzy.

Zimbabwe made a like-for-like replacement in batsman Mudzinganyama, who will feature in the rest of the match.

Sri Lanka resumed the fourth morning on 295 for four but lost Dhananjaya de Silva (63) early on when he was caught by Masvaure off the bowling of debutant seamer Victor Nyauchi (3-69).

Wicketkeeper Niroshan Dickwella (63) added 136 for the sixth wicket with Mathews before he was trapped leg before wicket by Pakistan-born spinning all-rounder Sikandar Raza (3-62).

Sri Lanka tried to up the tempo after that in search of quick runs and called time on the innings with nine wickets down to leave the hosts to face 17 overs before the close of play.

Mathews’ previous highest score was 160 against England in 2014 and he now has 10 test centuries.

Zimbabwe will need to bat for most of the final day to earn a draw in their first test since November 2018.

The two-match tour was hastily arranged after Zimbabwe was briefly suspended by the International Cricket Council last year because of government interference in the sport, but were reinstated in October.

The second test will also be played at the Harare Sports Club, starting on Jan. 27.

‘Not all money, only up to ₹ 1 lakh insured in banks,’ RBI-owned subsidiary...

To clean or not to clean: Things you may not know about your earwax

Constant knee pain? Know the difference between chondromalacia and osteoarthritis

Dravid disappointed over Indian coaches not getting opportunities in IPL |...

admin - November 28, 2019
0
LUCKNOW: Former cricketer Rahul Dravid has expressed his disappointment over Indian coaches not getting opportunities in the Indian Premier League (IPL). "I believe we've...