HYDERABAD: Two pink-ball Test matches in two weeks across the globe seem to have reaffirmed faith that fans will still flock to the stadiums in good number for the longer format, but with those games out of the way, attention now shifts to the instant version of the game.

The day-night Test against Bangladesh got over in three days, giving Virat Kohli and Co. extra downtime before they get down to business in the first of the 11 T20Is scheduled in the run-up to World T20 in Australia in October 2020.

That includes this three-match series against West Indies, the defending world T20 champions, beginning here on Friday, with all concerned at the Hyderabad Cricket Association (HCA) hoping weather will not play spoilsport. Getting the combination right will be paramount for the hosts, who beat Bangladesh 2-1 in the recently-concluded T20Is. 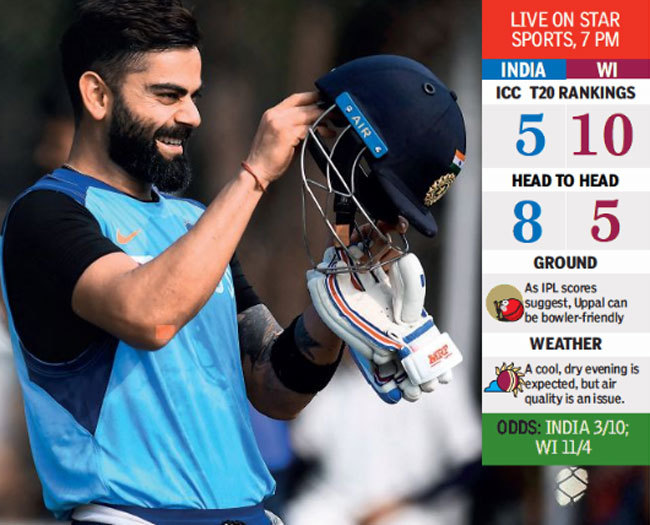 The Windies, meanwhile, lost by an identical margin to Afghanistan.

Shikhar Dhawan’s injury has seen Sanju Samson come into the squad but it’s an opportunity for KL Rahul to cement his spot at the top alongside Rohit Sharma. The Karnataka player has had a good domestic season and with the jury still out on MS Dhoni’s availability for the T20 Worlds, Rahul’s ability with the big gloves can be an asset for the team even if two specialist ’keepers in Rishabh Pant and Samson are available.

The middle order can be a concern despite skipper Kohli’s prolific touch — by the skipper’s own admission, batting first hasn’t been India’s forte — and Shreyas Iyer having a good series against Afghanistan with Manish Pandey, Shivam Dube and Pant out to lend muscle.

In the zone and Ready for Match no.1 😎💪 #TeamIndia #INDvWI https://t.co/hI7l6aJkkn

The bowling department sees the return of Mohammed Shami and Bhuvneshwar Kumar. The former is back in a start-stop career of seven T20Is in three years and the latter from an injury layoff. With Jasprit Bumrah in rehab, Deepak Chahar donned the finisher’s role with aplomb against Bangladesh in Nagpur, returning six for seven in a dream spell.

The big grounds Down Under will also be pencilled in when the Indians pick from the four spinners in the squad to see which of the two wrist spinners – Kuldeep Yadav and Yuzvendra Chahal – or the finger spinners – Washington Sundar and Ravindra Jadeja – fit the bill.

The Kieron Pollard-led visitors have their own issues to address. Pitchforked into the role of a captain, Pollard started well with an ODI series win over Afghanistan, but faltered in the T20I series that followed. Lendl Simmons is back, but Windies will sorely miss the services of Andre Russell. With former skipper Carlos Brathwaite now out of favour, the visitors look to Fabian Allen to fill the void.

He is back in the squad after having recovered from a knee injury. Brandon King and Hayden Walsh Junior had good outings too in CPL this season and the return of Evin Lewis gives them the firepower at the top in Chris Gayle’s absence, but Windies will miss Nicholas Pooran.

The 24-year-old was banned for four T20Is for ball-tampering and will be available for the second match of the series, but with or without him, there’s no gainsaying the fact that India hold all the aces.

admin - December 5, 2019
0
DUBAI: Front foot no balls in the upcoming T20I and One-Day International series between India and the West Indies will be decided by...