India’s 67-run victory over West Indies in the 3rd T20I on Wednesday was highlighted with a number of statistical highs as Virat Kohli and Co. produced a performance to remember in Mumbai. 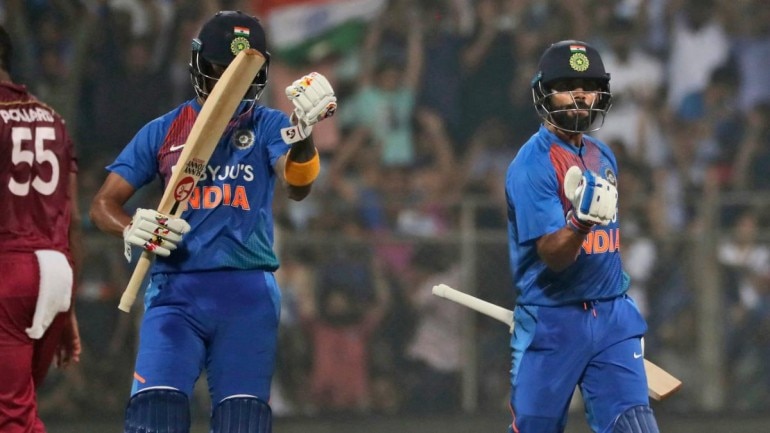 Riding on KL Rahul (91), Rohit Sharma (71) and Virat Kohli (70*) in Mumbai on Wednesday, India beat West Indies with an emphatic 67-run victory in the T20I series decider. After being put in to bat, India scored a mammoth 240/3 in their 20 overs before restricting their opponents to 173/8 with only West Indies skipper Kieron Pollard (68) posing a real threat.

After losing the 2nd T20I in Trivandrum, India opted for a power-hitting approach from the start of the innings, ending up hitting 16 sixes in total – 4 more than what WI managed in reply. Here are a few statistical highlights from the pulsating Mumbai match:

61 – The loss in Mumbai was West Indies’ 61st in T20Is making them the joint leaders in terms of most losses suffered in the shortest format. West Indies joined Sri Lanka who have also lost 61 matches to date. Bangladesh (60), New Zealand (56) and Pakistan (55) round up the top-5 teams with most T20I defeats.

2633 – Both Rohit Sharma and Virat Kohli finished at the joint top spot on the all-time T20I runs chart after their final innings of the year in the shortest format. The two batsmen now have 2633 runs each, though Kohli (75) has reached there in fewer innings than Rohit (104).

404 – With his 1st six on Wednesday, Rohit Sharma joined an elite list of players to hit 400+ sixes in all international matches (Tests, ODIs and T20Is). Chris Gayle (534) and Shahid Afridi (476) are the only other players to have crossed the milestone.

21 – Virat Kohli took just 21 balls to reach 50 in Mumbai making it his fastest fifty of his career. It was also the 5th fastest half-century by an Indian with Yuvraj Singh’s 12-ball-50 vs England in 2007 World T20 still the quickest.

1 – With Rahul, Rohit and Kohli each on fire in Mumbai, the match was the 1st instance of 3 batsmen scoring 70+ runs in the same t20 game!

If the Democratic nominee is Bloomberg, he would beat Trump

HDFC Bank: RBI will have to do heavy lifting to boost...