NEW DELHI: Given the luxury, which kind of car would you choose for a weekend escape to the hills? The terrain largely unknown and unrehearsed called for something robust, rugged and off-road-oriented vehicle with oodles of performance.

With parameters more or less set, my attention shifted to the Trailhawk. A special breed of Jeep Compass, which makes a light work of all-weather and all-terrain conditions, the company asserts. While thrill was the prime motive, at the outset, we had 36 hours at our disposal, 700 kilometres to cover with at least one-fifth of it in the hills of Uttarakhand to understand what the Trailhawk was capable of.


The not-so-brilliant thing about the trip was starting in the afternoon. Making the sluggish way through the hustle and bustle of Ghaziabad till the NH9 is in itself story of despondence. However, on the way, the sight of the Compass SUV was a regular affair. Well, from a distance it’s difficult to differentiate between the two, which only becomes clearer as you take note of the details.

The Trailhawk gets an exclusive BSVI-complaint 2.0-litre diesel engine mated to a nine-speed automatic torque converter, becoming the first one in the Jeep family. The power delivery is linear, engine refined and low-speed driving improved. Engineers have surely fine-tuned the powertrain as there is a significant difference in the throttle feedback in the city.

Filtering the sub-4.5 metre SUV through the crowded confines is a task cut out but the reverse parking camera and sensors made the life much easier. The suspension absorbed everything thrown at it, from potholes to speed breakers, keeping the ride decently composed. The crawling traffic consumed over an hour before we met the NH9. Part 2: Sprinting on the highways

Then arrived the inevitable and boring part of the trip. The 150-km-stretch on the NH9 runs straight through Uttar Pradesh, leaving behind scores of towns. The Trailhawk cruised comfortably at speeds well over 120kmph on a highway that has blessed me with countless trips.

Introspectively, with every trip, I have witnessed the places dotting the highway evolve. The lanes of the NH9 has multiplied, townships have expanded, probably at the expense of picturesque treeline and greenery. The brakes were so appropriately put to test. Every time, the NH9 entered into a township, Trailhawk’s discs were accurate with the braking duties, decelerating in a blink.

We didn’t have much to carry — a couple of duffle bags and a camera kit. The 438-litre boot space is rather a constraint in case you are looking to head out with your family on an extended trip. Well, there is always the chance of increasing the boot by folding the 60:40 second row.

Although Jeep positions the Compass Trailhawk as a 5-seater SUV, the space of offer is sufficient for four adults. TrailHawk gets an all-black interior, leather-wrapped seats, which are carried forward from the Compass. The cabin is a good place to be in with a generous amount of space on offer. Trailhawk gets a 6-woofer sound system and an 8.4-inch infotainment display. Well, those were continuously at use as we munched miles on the highway. 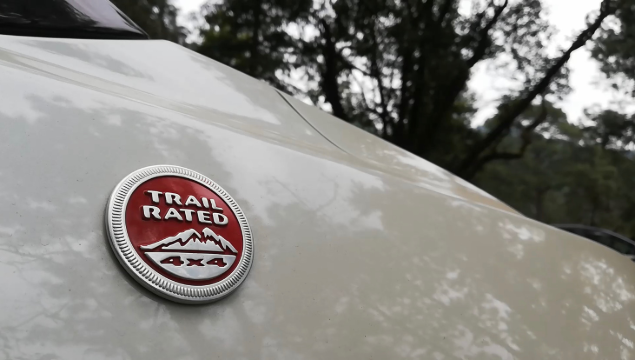 Hill driving needs quick gear shifts and brisk directional manoeuvres, which certainly I’m not much used to. As we sped past the elephant corridor of Corbett Tiger Reserve, the serpentine hill roads greeted.

Surprisingly, Trailhawk boosted my confidence like a pro. The gearshifts were swift and seamless, and at no point in time felt out of place. On the highways, the steering felt light. Well, now it felt more matured, more confidence -aspiring due to the variable-ratio steering, aiding in taking blind curves effortlessly. The hill descent mechanism was quietly helping throughout. 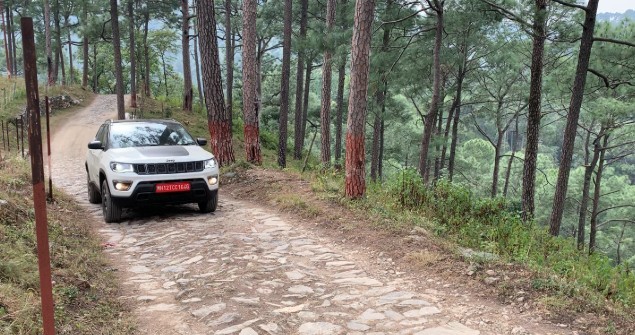 I had heard about the off-road track my friends took when the SUV was launched a few months back. The 4X4 wheel drive outperformed the expectations of most during the test, however, it was under the supervision of Jeep in an artificially-laid track.

My adrenaline rush prompted me to go off the usual hill road, take the loose mud patches, gravel-filled rocky up and down slopes and rutted tracks. The dedicated 4WD rock mode is a special feature in Compass Trailhawk, which on activation locks the SUV in first gear, and you have the entire 350 Nm of torque to bail out of any tricky situation.

The Trailhawk nailed in the department of off-roading, rightly earning the moniker of a mountain goat from enthusiasts. The approach and departure angles have been reworked, shaped in a way to keep the underbody off the terrain. Highlight, however, has been the 17-inch off-road special Falken tyres along with the increased ground clearance at 205 mm. The tyres crying in protest at high-speed corners, however, found themselves at peace in the off-road venture. A little disappointed, I was, at the conclusion of the trip. The SUV’s grip couldn’t be inspected in patch of water. 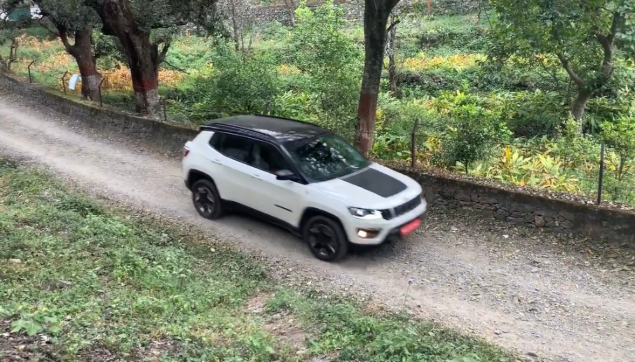 Things that are/could have been:Let’s jump to the heart of the matter: Who would buy the Trailhawk? The off-road-biased Jeep offers all the features the Compass does and more, however, at a premium of Rs 4-6 lakh. Unless, you are really into off-roading, it’s hard to argue for the asking price.

The performance is likely, yet not the quickest of the block. Against the rival Hyundai Tuscon, Trailhawk is almost two seconds slow at 12 seconds in 0-100 kmph charge. While whizzing was never Trailhawk’s forte, the off-road dexterity keeps it on top of the current no-rival market.

Also, Jeep claims over 16 kmpl for the SUV, which is still far from reality. In our test run, Trailhawk returned 11 kmpl in cities and 14 kmpl on the highways.

Indian banking system at the cusp of huge growth in next decade: TCS executive

Tehran response was ‘too fast and too furious’

Indian banking system at the cusp of huge growth in next...