This is much lower than the 12% nominal GDP growth (including inflation) budgeted by finance minister Nirmala Sitharaman, when she estimated the fiscal deficit for the current financial year at 3.3% of GDP.

While most people look at the real GDP growth (net of inflation) number, for policymakers in North Block and central bank officers, the nominal growth numbers are crucial since that is the base to calculate the fiscal deficit.

“The lower growth in GDP will further strain government finances. It could result in the central government breaching the fiscal deficit target of 3.3% of GDP for 2019-20,” said Care Ratings chief economist Madan Sabnavis, adding that fiscal deficit for the year could be in the range of 4.1-4.3% of GDP. 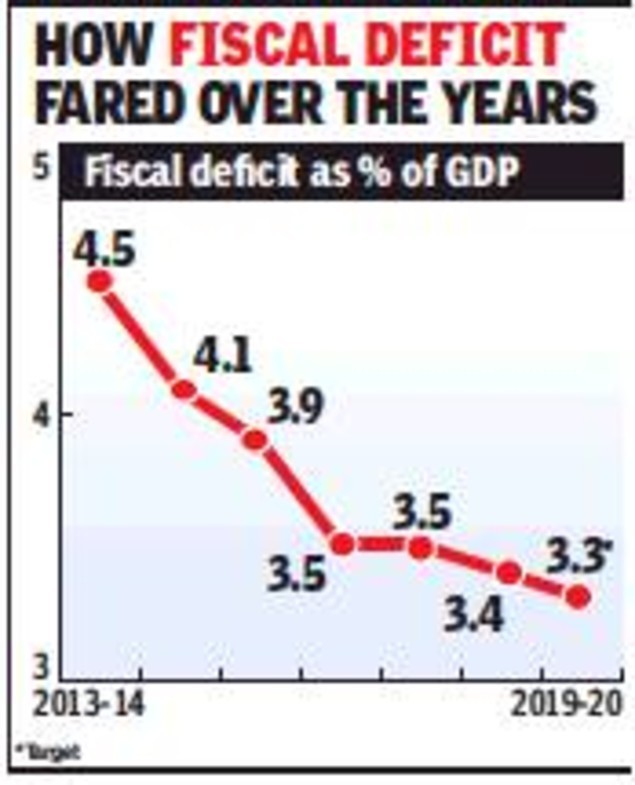 Already, finances are under strain with separate data released by the Controller General of Accounts on Friday showing that at Rs 7.2 lakh crore, fiscal deficit was 102.4% of the Budget estimate (BE) at the end of October.

Although marginally better than the near 104% of BE reading at the end of October 2018, tax collections were a major area of concern as tax revenue rose just 1.2% during April-October 2019.

The economic slowdown, which is reflecting in lower imports, meant that customs duty collections fell over 15% in October 2019 to Rs 64,459 crore. It was already showing in the integrated GST collections, which have been declining for the past few months as companies were importing lower quantities of raw material and capital goods used for production in factories.

While the Rs 1.76-lakh-crore surplus transfer from the RBI and claims of higher than-budgeted disinvestment receipts may come to the government’s rescue, even government officers are sceptical of the Centre meeting the deficit target, without cutting down on expenditure.

Sitharaman has opted against commenting on numbers but has maintained that she will not wield the axe on major spending plans. The FM is currently reviewing the revised numbers shared by government departments in the run-up to the Budget, which is scheduled to be presented on February 1.

India will not bow to this painful crisis: Sonia Gandhi on eve of PM’s...

2020 Olympic gold is an achievable goal for the team: Rani Rampal | Hockey...

Salman Khan’s track ‘Tere Bina’ with Jacqueline Fernandez to be out...

At the very least 600 Amazon staff hit by coronavirus: Report...