Viswanathan Anand and World Champion Magnus Carlsen rang the customary Eden Gardens bell on Day 2 of the ongoing second Test between India and Bangladesh in Kolkata. 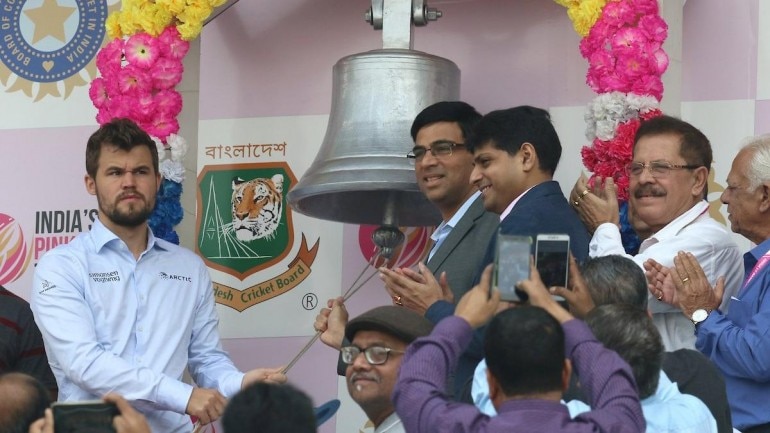 Viswanathan Anand and Magnus Carlsen and ringing the Eden Gardens bell on Day 2 of Pink ball Test. ( Courtesy by BCCI)

The two tennis legends were present in Kolkata as the Tata Steel Chess Rapid and Blitz kicked off in the city on Friday. The same day, Viswanathan Anand and Carlsen were also seen with newly appointed BCCI president Sourav Ganguly.

India are playing their first-ever Day/Night Test match against Bangladesh. The opening day of the historic day saw over 50,000 crowd turn-out at the iconic venue.

Apart from the cricketing legends, India’s sporting heroes PV Sindhu, Mary Kom, Sania Mirza, Mithali Raj, Jhulan Goswami among others were also felicitated after the end of the 1st day’s play in Kolkata.

India had a great start to their Pink ball cricket journey as they outclassed Bangladesh in all 3 departments on Day 1. Ishant Sharma shone with a historic 5-wicket haul as Bangladesh were shot out for 106 in just over a session.

France does not need a power struggle with Germany: Commentary

Kashmiri youth dies in Japiur hospital after being beaten up by...

Coronavirus and jobs report in focus on Wall Street