BENGALURU/CHENNAI: Rekha Sudarsan’s activewear wardrobe has grown by 100% since she started running marathons 10 years ago. “Earlier, I used to run in men’s t-shirts because they used to fit me fine. Now, with the variety of activewear in the market, I feel comfortable in dry-fit garments,” she says.

Women’s share in the activewear category has gone up for sports brands such as Nike, Reebok, Adidas and Puma because of an increase in their participation in sports and other activities such as running, yoga, pilates and Zumba.

Japanese sportswear company Asics, whose running gear contribute 70% to its topline in India, says women running shoes now make up about 22% of the pie compared to 12% a few years ago. The company offered limited sports apparel for women when it started operations in India but has off-late added sports bras because of rising demand.

For German sportswear brand Puma, the women segment now makes up 30%, or close to Rs350 crore, of annual sales, up from 20% a few years ago. And that segment is growing at a rate of 30%, higher than the other categories. Within the segment, running shoes are growing at 35%. 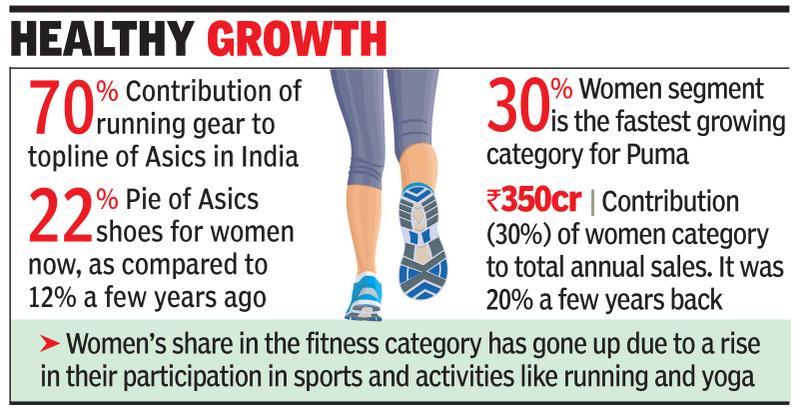 Asics India MD Rajat Khurana is himself a runner. He says when he started running in 2011, he hardly saw any women. “But with the rise in fitness awareness and higher spending capacity, women have learnt to balance family, career and fitness,” he says.

Puma India MD Abhishek Ganguly says there’s been a big change in the confidence and belief among Indian women. “Today, the consumer is aware that they need specific products for, say, running, which is very different from what they use for cross training. Hence our bra tops, tanks, fitness pants have more demand than ever before,” he says.

Sharad Singla, brand marketing director of Adidas India, makes the same point. “One needs different footwear for marathons, leisure runs and daily runs, and women are asking for the right footwear as they are more aware. We have been actively bringing sports bras to India for the last two years as there is a coolness factor associated with it unlike previously,” he says.

Women also often inspire each other and create a group behaviour. Group classes in various forms of fitness activities like aerobics, Zumba, calisthenics, yoga, pilates, dance fitness is growing phenomenally amid women. The proportion of women in the full marathon in Mumbai and the half in Delhi has been touching the 25% mark, says sports and event management company Procam. “Women’s participation in marathons is particularly high in Bengaluru,” says Vivek Singh, joint managing director of Procam.

Ever heard of sabja or tulsi seeds? Here’s why you should include them in...

admin - January 13, 2020
0
MUMBAI: Indian palm oil importers have effectively stopped all purchases from Malaysia after the government privately warned them to shun product from the...