Shimron Hetmyer and Shai Hope were part of a 218-run partnership for the second wicket which helped West Indies chase down 288 with more than 2 overs to spare. 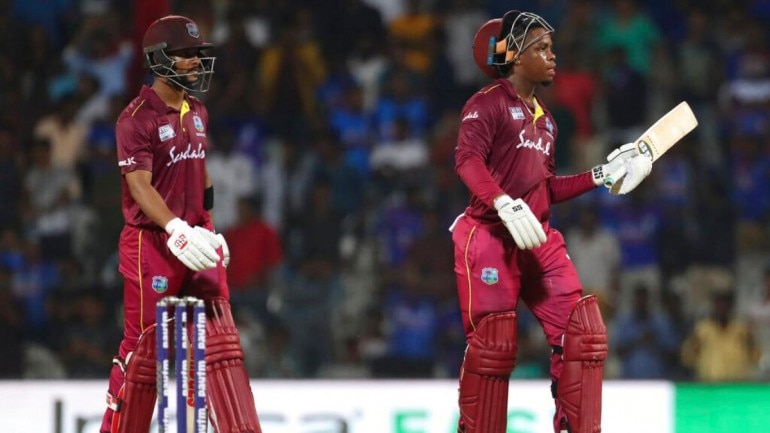 Shai Hope on Sunday revealed that he was battling cramps but he batted through the pain to guide the West Indies to an emphatic victory against India in the first ODI in Chennai.

Hope scored 102 not out off 151 balls and was part of a match-winning partnership worth 218 runs for the second wicket with Man of the Match Shimron Hetmyer which helped the Windies chase down 288 with 13 balls and 8 wickets to spare.

“Cramping a bit, that’s why I’m not smiling too much. Key is to stay as long as possible, see off the new ball, assess the situation. Key is for someone to bat deep, win the game,” Hope told the host broadcaster Harsha Bhogle after the match.

“Pitch was a bit of a slow turner. Don’t know how he (Hetmyer) did it, made batting look easy. Cricket is partnerships. As long as someone bat deeps. The way he was playing, took the pressure off,” Hope added.

Hetmyer top-scored with 139 runs off 106 balls with the help of 11 boundaries and 7 towering sixes. Talking about the partnership with Hope he said: “We just keep it simple because we have played with each other quite a while now. So I know his game and he knows mine.

“Basically, when we are batting together most of the time I’m the aggressor and he is the person that sticks around and knocks it around. It is always nice to bat with someone like him.”

The 22-year-old batsman termed his knock as his best.

“At the moment this is my highest score in international cricket so this would be the best one. It is always nice chasing a score. It feels much better than setting one. It is a work in process for me,” Hetmyer added.

Both the teams will now face each other in the second game at Visakhapatnam on December 18.

Bhoot Part 1 The Haunted Ship teaser out: Vicky Kaushal is ready for a...

How Trump may power a payroll tax lower with out ready...

admin - December 13, 2019
0
MADRID: Barcelona and Real Madrid could be playing to be first in La Liga over the Christmas break on Wednesday but both are...