The major stock indexes all rallied about 1% in the session after Wall Street learned that 266,000 jobs were added to the economy in November, trouncing the projected 187,000 figure.

Cramer said the nonfarm payroll results “drove a stake through the heart of the idea that there’s a recession looming just around the corner.”

“When we get an amazing employment report, we can take a break from the on-again, off-again China news,” the “Mad Money” host said, “and just focus on earnings. And when we focus on earnings, I think we’ll like what we get to see.” 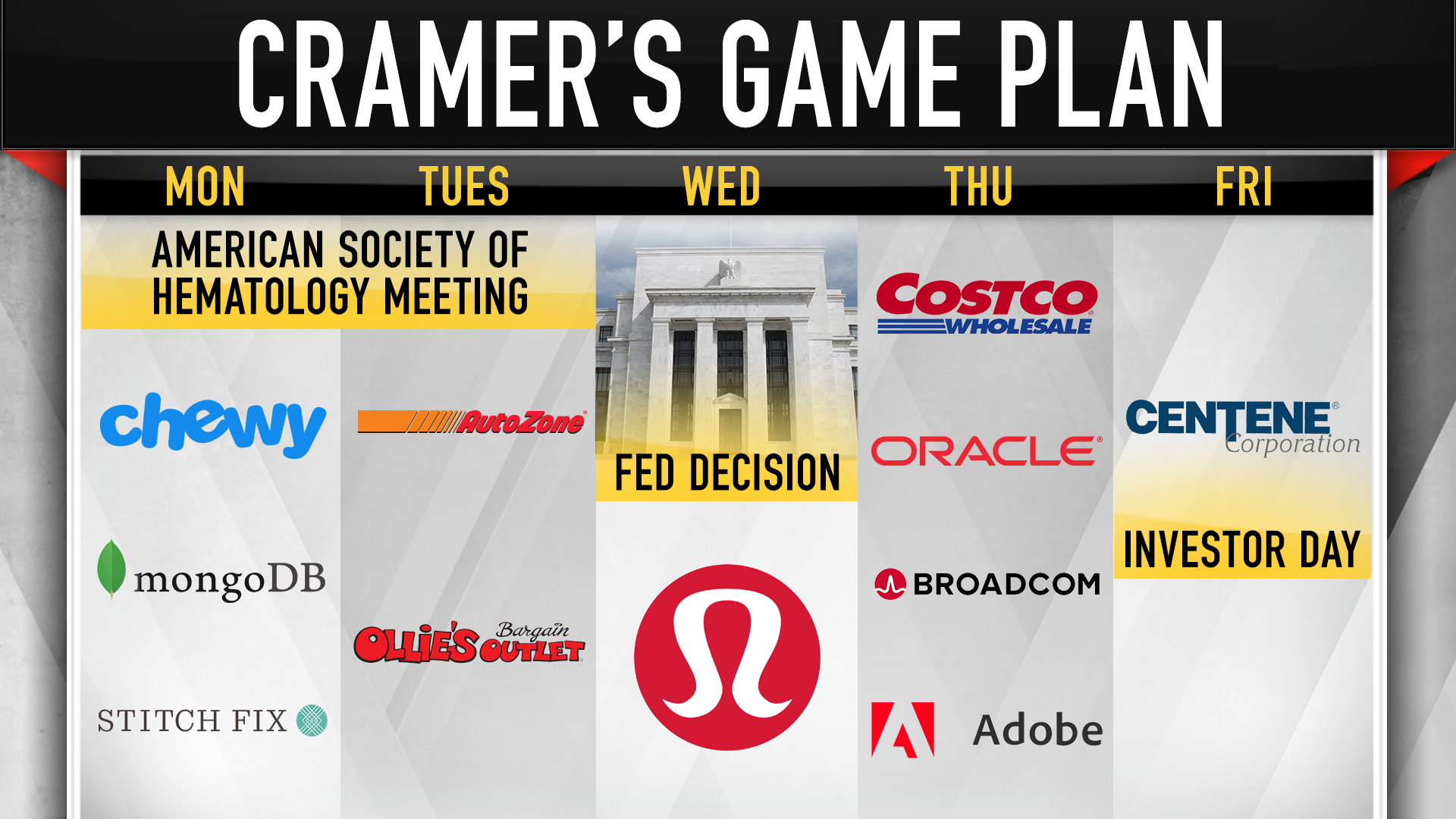 The American Society of Hematology will close out its four-day 61st ASH Annual Meeting and Exposition. Investors can expect to get new information from pharmaceutical companies.

“I’m paying close attention to Bristol-Myers, which will have a webcast of potentially market-moving data from the conference,” Cramer said.

Chewy reports quarterly numbers after trading ends. The fast-growing online pet retailer is expected to bring in more than $1.2 billion, but the 2019 IPO class member is still working to reduce its losses on its way to profitability.

MongoDB will reveal third-quarter fiscal 2020 results after the closing bell. Analysts expect the database platform company to lose 28 cents per share and business to grow more than 53% to $99.7 million.

With the stock up more than 56% year to date, “I’ve gotta wonder if the company’s rapid revenue growth will be enough to impress Wall Street at these levels,” Cramer said.

Stitch Fix has a first-quarter fiscal 2020 earnings call scheduled for the afternoon. Following eight straight quarters of turning a small profit, the online personal styling firm is estimated to lose 6 cents per share but grow sales 20% to $441 million.

Autozone reports first-quarter fiscal 2020 earnings in the morning. The auto parts retailer is projected to turn in $13.70 in profits per share on more than $2.7 billion in sales, according to FactSet.

“I recommend buying some beforehand in anticipation of great results, and then buying some after in case it gets hit, like usual. Remember, if AutoZone goes down, the company will be in there buying back its own stock right next to you.”

Ollie’s Bargain Outlet reports after the market closes. Analysts estimate 38 cents in earnings per share on $323 million in revenue.

Lululemon also reports third-quarter earnings after the closing bell. The athleisure wear company is expected to bring in 93 cents of profit per share out of $899 million sales.

The Federal Open Market Committee will wrap up its two-day meeting followed by comments on interest rates from Federal Reserve Chair Jerome Powell.

“Ideally, he’ll also add that he stands ready to give us more rate cuts if the trade war with China continues to weigh on the industrial side of our economy. That would be a huge positive,” Cramer said. “But if he takes a more hawkish tone … look out below.”

Costco is slated to release results from its 2020 fiscal first quarter in the afternoon. FactSet forecasts $1.71 EPS and more than $39.9 billion of revenue.

Oracle reports 2020 fiscal second-quarter earnings after trading ends. The cloud infrastructure and services company is expected to record 88 cents in earnings per share and about $9.6 billion in revenue, FactSet said.

Centene will host an investor day in the morning. Cramer said the managed-care stocks have “come alive” after Democratic presidential candidate Sen. Elizabeth Warren slowed down the timeline on her proposal to implement a single-payer health-care system.

“I think Centene’s got a lot more room to run given that it’s only up 5% for the year. I recommend buying the stock ahead of that Friday analyst meeting,” Cramer said, “and I wouldn’t be surprised if management lays out an aggressive target for 2020.”