WASHINGTON — The Supreme Court seemed unlikely to deliver a major win for gun-rights activists during arguments on Monday in the first significant Second Amendment case the justices have heard in nearly a decade.

The case was challenging a New York City gun regulation that barred the transport of handguns outside of the city, even to a second home or firing range. After the court agreed to hear the case, though, the city did away with the regulation and the state passed a law that prevented the city from reviving it.

While court conservatives including Justices Neil Gorsuch and Samuel Alito seemed eager to use the case to address the reach of the Second Amendment, it appeared likely after an hour of arguments that Chief Justice John Roberts would side with the court’s liberals to dismiss the matter altogether as moot in light of the repeal of the regulation.

The dispute had one of the highest profiles of the court’s term. The court has not addressed gun legislation since deciding two landmark cases in 2008 and 2010, which held that the Second Amendment protected the individual right to keep guns for the purpose of self-defense in the home.

A decision in thew New York case is expected by July, in the midst of the 2020 presidential election. The nation’s gun laws have become one of the key issues in the Democratic race amidst an uptick in mass-shooting deaths and youth-led activism, though substantive new legislation is seen as all-but-impossible for the foreseeable future under divided government.

Supporters of gun control and firearm safety measures hold a protest rally outside the US Supreme Court as the Court hears oral arguments in State Rifle and Pistol v. City of New York, NY, in Washington, DC, December 2, 2019.

Paul Clement, who argued on behalf of three gun owners in New York and a state affiliate of the National Rifle Association, argued that the case was still active because the city had not been required to say the regulation was unconstitutional.

Clement also argued that even under New York’s new regulations, gun owners could still be penalized if they did not travel with their handgun directly to a firing range or home outside the city, such as if they stopped for coffee.

But Richard Dearing, an attorney for New York, said that the city guaranteed that gun owners would not be prosecuted for such stops. And he said that any challenge to the new regulations would have to be argued in a future battle.

“There may be a controversy here. But it’s a new controversy that will have to be litigated in a new case,” Dearing said.

Clement, who argued for 20 minutes, had little time to address the merits of New York’s gun regulation. Instead, he spent nearly all of his arguments fielding questions from the court’s liberal wing about why the justices should rule on the case at all.

Justice Ruth Bader Ginsburg, who asked the first question of the day, sounded off on a theme that would be heard throughout.

“The state says: City, thou shalt not enforce the regulations. So, what’s left of this case?” Ginsburg asked.

Ginsburg’s health has been in the spotlight because of two recent cancer scares and a hospitalization last month after she experienced chills and a fever. But the 86-year-old justice appeared healthy on Monday.

The court’s other liberals also wrestled with Clement over whether it was proper for the court to decide the case.

“You’re asking us to opine on a law that’s not on the books anymore,” said Justice Sonia Sotomayor, an Obama-appointee.

Justice Stephen Breyer, who was appointed by President Bill Clinton, said he did not think it was bad “when people who have an argument settle their argument.” 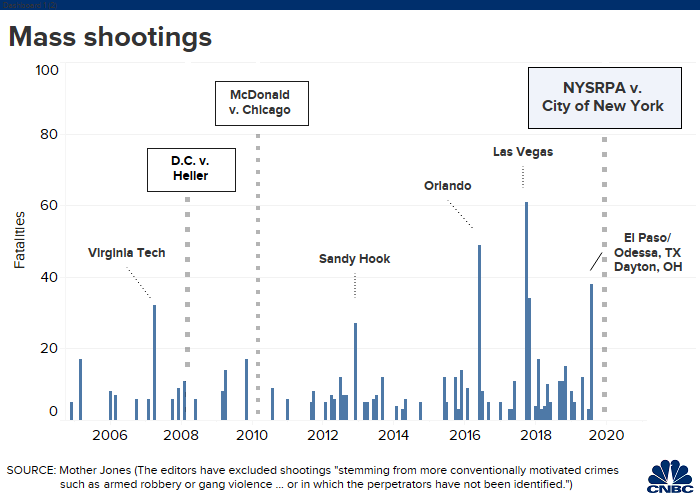 Roberts asked few questions throughout. But at one point, the chief justice asked Dearing if it was possible that individuals who violated the old regulation could be targeted in any way by the city, even though it is no longer in force.

Dearing responded that the gun owners would face no consequences for any past violations of the regulation.

“I’m making that representation to this Court on the record on behalf of the city of New York,” he said.

Roberts also asked Dearing whether finding the case moot would limit the ability of the gun owners to seek monetary damages. Dearing said that he did not believe it would, though it would depend on the specifics of their allegations.

Justice Brett Kavanaugh, who is known to have an expansive view of the Second Amendment, did not ask any questions.

One wrinkle during arguments came from a difference in opinion between Clement and Jeffrey Wall, the Justice Department’s principal deputy solicitor general, who was arguing in favor of the gun owners.

Gorsuch asked Wall whether he agreed with Clement that the potential for gun owners to be prosecuted for stopping for coffee while traveling to a gun range kept the case alive.

Wall said it was a “close call” and a “hard question” but stopped short of endorsing the argument. Instead, Wall emphasized that the gun owners could still seek monetary damages.

All in all, the justices spent just a few minutes probing the key constitutional question that gun-control activists feared would be on the table and that gun-rights groups hoped the court would address.

Since the court’s landmark 2008 opinion in D.C. v. Heller, the lower courts have generally weighed the public interest in gun laws as part of their consideration of whether they are legal. Using that methodology, appeals courts have upheld a broad range of gun restrictions, and those laws have remained on the books as the Supreme Court refused to review them.

Conservatives, including Kavanaugh while a federal appeals court judge, have argued that such considerations are unconstitutional, and that judges should instead look to whether the law was historically seen as permissible.

Ahead of arguments, gun-control activists worried that the court’s 5-4 conservative majority would issue a ruling that adopted that approach.

Read more: The Supreme Court is about to hear its biggest gun-control case in a decade

Here are the House impeachment managers in Trump’s Senate trial